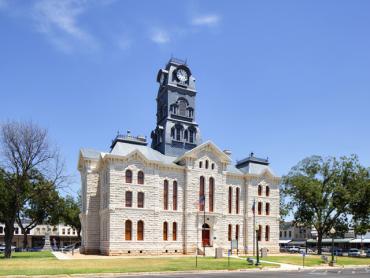 “The Hood County Courthouse is the heart and soul of our community. Built of native limestone in the middle of a town square influenced by our native Upland South culture, the courthouse gives Granbury its special sense of place and unique charm. Our courthouse reflects the past, significantly contributes to the present, and now heralds a shining future for Hood County.”
– Mary Saltarelli, Consulting Executive Director, Preserve Granbury

The Hood County Courthouse acts as the centerpiece of the vibrant historic downtown square of Granbury and its three story clock tower draws visitors into town from the surrounding highways. In 1890, one of Texas’ most prolific courthouse architects W.C. Dodson designed the French Second Empire limestone building with ornamental sheet metal tower and cornice, emulating some of his recently constructed courthouses Lampasas, Parker and Hill. The facades are divided into an entry pavilion, two recessed bays and two end pavilions which was standard for Dodson’s courthouse designs.

After a tornado severely damaged the tower in 1968, Norma Crawford, the publisher of the Hood County News Tablet, led a grassroots effort to convince the Hood County Commissioners’ Court that the tower was worth saving. “It needed a lot of repair. There was talk of leveling the roof” but thankfully Crawford’s and the community’s efforts prevailed and the court repaired the beloved tower.  This rare act of 1960’s preservation sparked a renewed interest in historic Granbury and eventually developed into the strong preservation ethic of the community today. Saltarelli, Mary. Historic Hood County: An Illustrated History.

After brief consideration of moving the county seat from Granbury to Thorp Spring, the 1890 commissioners’ court visited recently completed courthouses nearby and carefully reviewed proposals from architects before selecting W.C. Dodson to design the county’s current and fifth Hood County Courthouse for the square which was established in 1867and designed as the geographical center of Granbury. $34,500 in bonds were issued and approved to cover construction costs of the courthouse.

Listed on the National Register of Historic Places in 1974.  Designated a State Antiquities Landmarks in 1981and a Recorded Texas Historic Landmark in 1970.

The restoration of the Hood County Courthouse created dramatic results on its interior. Dropped ceilings, partitions subdividing spaces and distracting steel columns installed in the District Courtroom to support the tower were all removed to open the building up to its original grandeur. All of the original interior finishes were restored including ornamental painting that covered the District Courtroom’s plaster walls from floor to ceiling. The unique shutter track system, removed from the building years before, was replicated to provide flexible window treatments for occupants. Extraordinary examples of ornamental hand painting on five vault doors and two safes was uncovered by removing years of over-paint and then protected by trained paint conservators. The 1890 Seth Thomas clockworks were restored by the county to original working order and the clock must be wound by hand as it was done in 1890.

On the exterior, some of the limestone was repointed and the paint on the cornice, window sashes and frames was restored to its original palette of red and cream. An ADA ramp was installed for access into the building and the county replaced perimeter sidewalks and sod.

The project architect was HDR Incorporated with ArchiTexas acting as the Preservation Consultant. Both firms are out of Dallas. The general contractor was JC Stoddard of San Antonio.

Through the Texas Historic Courthouse Preservation Program administered by the Texas Historical Commission, Hood County received a Planning grant of $344,171 in 2001 (Round II) and a Full Restoration Construction Grant of $5,000,000 in 2008 (Round V).

There are over 10 RTHL cemeteries located throughout the county. See THC’s Historic Sites Atlas for info.

For more information about historic places and events in this region, visit the Texas Tropical Trail Region.

For more information about lodging, restaurants and businesses to help your visit be enjoyable, visit the Granbury Chamber of Commerce.