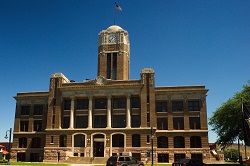 The 1912 Johnson County Courthouse was built by Dallas architects Lang and Witchell with Charles E. Barglebaugh, in the Classical Revival style with Prairie-style elements. The building was commissioned to replace the Second Empire-style 1883 courthouse, which burned down on April 15, 1912. Lang and Witchell were seen as progressive architects in their time, shying away from the traditional and “safe” Beaux-Arts and Late Victorian styles; various “Sullivanesque” architectural elements are reflected in many of their designs, including the Cooke County Courthouse, and both the Sanger Brothers Department Store and Southwestern Life Insurance buildings in Dallas. At the time the new courthouse was finished in 1913, Cleburne was experiencing an early boom as a progressive and industrial northern Texas town.

The building’s unique architecture is characterized by strong, horizontal elements and flat, hipped roofs, in addition to Prairie-style elements and ornamentation. The exterior is constructed of pink granite ashlar and both rusticated and smooth Elgin brick. Each of the building’s four sides have central colonnades with Giant Order columns, and an inscription on the entablature reading “A.D. Johnson County 1912.” The building’s tower rises several stories taller than the main building and is topped by a hemispherical dome. The tower houses the building’s impressive interior atrium and glass dome, rising six stories tall, clad in Georgia marble and with Prairie-style decoration on cornices and architraves. Hallways throughout the building also have marble wainscoting, and cast-metal stairs showcase Prairie-style balustrades.

Local firm Architexas was brought in to create a construction Master Plan for the courthouse restoration in 2005, and the project was completed with grant money from the Texas Historic Courthouse Preservation Program. The project included the restoration of double-height courtrooms, corridors, and stairwells while updating the building to meet accessibility and fire safety requirements.