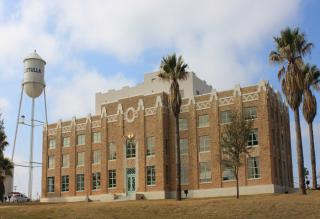 “It’s amazing to see how well it was built. It was a thing of beauty then, and it will be a showpiece for generations to come.”
– Joel Rodriguez, La Salle County Judge

The courthouse is sited at the center and highest point of Cotulla facing a city park or public square.  The courthouse is a four story, concrete frame “fireproof” building constructed of tan brick with terra cotta decorative elements, a 150’ by 52’ footprint. Stylistically, it reflects a transition from the more ornate Art Deco to the Moderne style favored in the 1930s. The top floor housed a jail. No major changes to the design and layout of the building occurred except that air conditioning was provided to the courtroom and offices via window units in the 1960s.

The La Salle County Courthouse is the fourth courthouse built on this courthouse square since the county was created in 1858. The population of Cotulla doubled between 1920 and 1930 in conjunction with the construction of the Pan American Highway and led to great optimism about the future of the county.  A bond election passed for $150,000 and Henry Phelps of San Antonio was commissioned in 1930 to design a building “of modern architecture”, it was completed in November 1931. It contained the county’s first elevator.

Listed on the National Register of Historic Places in 2007.  Designated a State Antiquities Landmarks in 2010 and a Recorded Texas Historic Landmark in 2010.

The recently completed project preserved and repaired original historic features such as the steel frame windows, brick and terra cotta masonry, terrazzo floors and vault doors. All of the district courtroom furnishings and many of the olive green steel office units, are original. New cork and linoleum flooring matches the historic colors and patterns. The Art Deco design of the entrance doors duplicated the appearance of the original doors from an old photograph. A new system of energy efficient heat pumps located underground replace the former window mounted air conditioners.  Security and communication systems will be significantly upgraded. The only major design change is the enlargement of the original elevator shaft and new restrooms on the third floor where the space had been unfinished previously.  The project architect was Killis Almond; the general contractor was JC Stoddard, both of San Antonio.

Under County Judge Jimmy Patterson, La Salle County received a $10,000 “Smart Start” grant from the National Trust for Historic Preservation toward the preparation of a preservation master plan. In 2004 County Judge Joel Rodriguez engaged their architect to prepare the construction plans.  The project was successfully completed in 2012 with a strong county leadership and a significant local match.

A rededication ceremony was held in the City Park facing the courthouse on January 26, 2013. The day included speeches from public elected officials and a mariachi band.