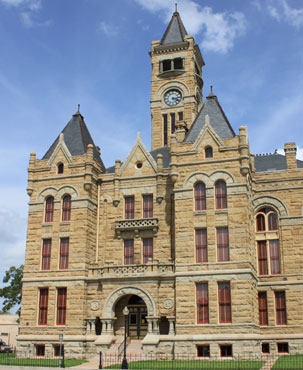 The 1899 Lavaca County Courthouse is now fully restored and is for its next century of service to Texas.

This building is a masterpiece of Romanesque Revival design by notable Texas architect, Eugene Heiner of Houston. Ornate interiors were restored, the elevator was relocated to a more historically sensitive location, a new HVAC system was installed, and major repairs to the building’s 109 year old windows were made.

The slate roof and distinctive tower were restored in a previous round of the Texas Historic Courthouse Preservation Program.

The building was rededicated on September 11, 2010.