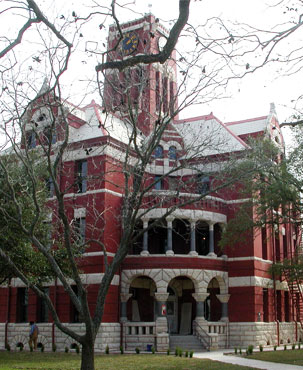 Designed by James Riely Gordon in Romanesque Revival style, the Lee County Courthouse was completed in 1899. Its relative lack of ornamentation distinguishes it from Gordon's earlier, more lavishly decorated courthouses. Located on Main Street between Hempstead and Richmond, the courthouse is three stories tall with a clock tower with a face on each side of the building.

Through the years, the courthouse retained the majority of its historical integrity, but was threatened by basement flooding, resulting in spalling concrete and water infiltrating through rotted windows. The restoration work added below grade water proofing, repaired exterior masonry, restored the windows, and replaced mechanical and electrical systems. Decorative painting in the district courtroom was recreated and reflects the community's Wendish roots.

The building was rededicated on October 8, 2004. In 2014, the county was awarded a $450,000 Round VIII emergency grant for above-grade repairs to masonry, doors, windows, and interior finishes affected by structural movement, which was addressed by foundation stabilization work using a Round VI $804,233 emergency grant awarded in 2010.