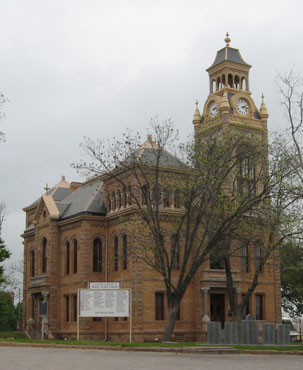 Jacob Larmour and A.O. Watson of Austin designed the Romanesque Revival courthouse, completed in 1892. Unlike most Texas courthouses, the tower is situated on the northeast corner of the front facade rather than in the center of the building.

A previous grant award restored the roof, repaired windows, updated systems, and returned the courtroom to its original appearance. Due to funding constraints at the time, tower reconstruction was deferred.

The existing tower is a 1913 modification to the original design. The tower was restored to its 1892 appearance, starting at the level of the stone finials. The reconstructed tower is taller than the previous one, replacing the pavilion type roof with an open colonnade and cupola. Compatibility to the rest of the building with regard to proportion, material, and detailing was restored. Roof cresting for the flat roof areas were reproduced as a part of this project.