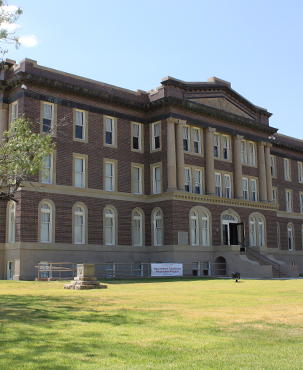 “These buildings (courthouses) have been the lifeblood of our counties.”

“When we went into this restoration, we went into it with the idea that this was the people’s courthouse…Everybody uses it….It was money well spent and well received….What we’ve noticed is a cleaning up of the downtown area, more civic pride.  It has affected the whole community.  This was the start of the facelift….It’s had a remarkable effect on the county as a whole.”

The interior corridors feature terrazzo floors, Georgia marble wainscots, integral color plaster walls and a miniature rotunda topped by a skylight bringing natural light (and originally ventilation) into the heart of the building.  The double-height courtroom is distinguished by coffered plaster ceiling “beams”, all of the original courtroom furnishings, and a full spectator balcony with cast iron fixed seating.

Mills County, founded in 1887, has had only two courthouses. The first county building on the courthouse square was the 1889 jail, which still stands on the corner today. The first courthouse was built in1890, but burned in 1912 under suspicious circumstances. Like many courthouses during this time period, the new 1913 courthouse embodied state-of-the-art “fireproof” construction features, including structural clay tile walls, concrete framing, terrazzo and scored concrete flooring, and steel windows in the offices of the County Clerk and District Clerk to protect deed records and court documents.

Listed on the National Register of Historic Places in 2000. Designated a State Antiquities Landmarks and a Recorded Texas Historic Landmark in 2002.

Marilynn Johanson led the Mills County Restoration Association throughout the construction project. During this time, the non-profit organization published a newsletter to communicate with county citizens about the progress of the work and dispel rumors. The group raised over $150,000 toward the county’s grant match funding.

Former County Judge Rob Lindsay (now Goldthwaite City Manager) and current County Judge Kirkland Fulk maintained support from the Commissioners’ Court for the project through more than a decade, as the project progressed from the Master Plan stage, through grant applications, and finally construction.

A rededication ceremony was held on August 27, 2011 in the District Courtroom. The highlight of the ceremony was a medley of patriotic American songs sung by the Mills Tones, a local men’s a cappella chorus. State Senator Troy Fraser and State Representative Sid Miller gave rousing speeches to a standing-room-only crowd of supporters.

Read more about the dedication in the Brownwood Bulletin.