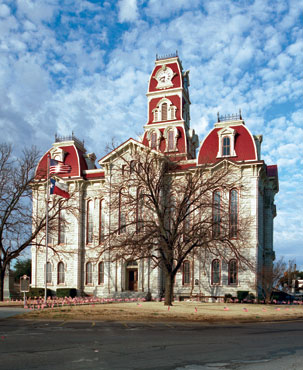 The 1886 Parker County Courthouse in Weatherford was designed by architect W.C. Dodson. The style and design is similar to his other Texas courthouses in Hill, Hood, and Lampasas counties.

The exterior of the Parker County Courthouse was restored in the early 1990s; however, the interior was heavily modified since the original construction.

The current project restored the original interior configuration and finishes. The district courtroom, one of the largest in the state, was restored to its original size. The courtroom originally featured decorative wall and ceiling painting, small wood balconies and patterned floor coverings, all of which were restored. The original floor pattern was recreated in carpet.

The mechanical, electrical, and plumbing systems were replaced, and the courthouse made accessible to people with disabilities. In the future, the community hopes to restore the design of the original courthouse square, which has been completely lost to highway and parking lots.

The courthouse was rededicated on June 4, 2005.