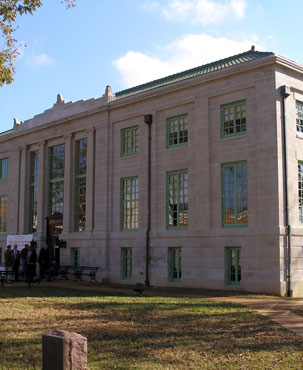 “There is no single event that has done more to revitalize and re-energize our community than the renovation of our County Courthouse… Small, rural Texas counties are the historical and cultural backbone of Texas.   Without the valuable work being done by the Texas Historical Commission (and the courthouse restoration program) many of these counties will wither and die.  That would be a tragic loss to all of Texas!”  —County Judge, Samye Johnson

"It's really the anchor of the county. It's the people's courthouse."  —Betty Oglesbee, San Augustine Garden Club

The 1927 San Augustine County Courthouse’s Classical Revival style is characterized by a patinated bronze entry and transom surrounded by flat limestone pilasters, a matching pair of lanterns, and topped by a low pediment. This stripped Classical style shows the beginnings of a transition from the ornamental buildings at the turn of the century to a sleek, restrained style which would become popular during the 1930s and 40s. The construction consisted of concrete frame, with a Leuders limestone veneer, wood sash and steel frame windows, topped by a green Ludowicki tile roof.

The main entry opens to a split-level open lobby landing with faux-stone plaster walls, plaster scroll brackets, and terrazzo floors. The District Courtroom, located on the Second Floor, features two-story Palladian-style windows in one of the largest courtrooms in East Texas. The judge’s bench and spectator fixed seating are original furnishings.

In 1833, the municipality that would become San Augustine was surveyed and platted in a city grid pattern that may have been the first of its kind in Texas. After the victory at San Jacinto, San Augustine was named the county seat for the Republic of Texas and incorporated in 1837. The customs office served as the center of justice until a two-story brick courthouse was built in 1854 two miles west of the original settlement at Ayish Bayou. In 1890, a fire destroyed much of the town.  The old courthouse was demolished to make way for a new one on the courthouse square. By 1901, railroad tracks were laid to San Augustine that were eventually operated by the Santa Fe Railway, primarily to transport lumber to and from large sawmill operations. By 1914, the population reached 1,300. By the time the modern courthouse was built in 1927, city dwellers had access to municipal water, light and sewage services, as well as ice and natural gas.  Following these boom times, San Augustine was hit with both the Great Depression and the decimation of timberlands that had been the economic backbone of the area.

Listed on the National Register of Historic Places in 2004. Designated a State Antiquities Landmarks in 2005 and a Recorded Texas Historic Landmark in 2001.

The restoration of the 1927 Classical Revival courthouse included restoring the original green tile roof and replacing the aluminum windows with wood casement windows, painted the historic green color to match the roof. The building's Leuders limestone exterior was cleaned and patched. All mechanical, electrical, plumbing, and fire-protection systems were replaced to meet modern standards. Walls and trim were painted with historic paint colors to complement the existing terrazzo floors, polished to the original luster. The County Courtroom was reconstructed, while improvements to the District Courtroom included installation of a new acoustical ceiling and sound system, restored lighting and fixed seating, and reconstruction of the gallery overlooking the space. Wall acoustic panels were added to the County Courtroom, while a special acoustic plaster replaced the District Courtroom ceiling, to improve functionality of these spaces. Several historic vault doors were fully-restored. The building became fully accessible for the first time.

Through the Texas Historic Courthouse Preservation Program administered by the Texas Historical Commission, San Augustine County received a Planning Grant in 2004 for $90,093, followed by a Construction Grant in 2008 which eventually totaled $3,690,711.49. In all, San Augustine County received $3,780,804.49 in state grant funding.

The San Augustine Garden Club, led by Betty Oglesbee and others, raised the entire county match (over $650,000) through fund-raising and grant applications to foundations, particularly the T.L.L. Temple Foundation of Lufkin, Texas. They also supported the compilation of the Master Plan and paid for two conservation studies of the courthouse during the planning phase.