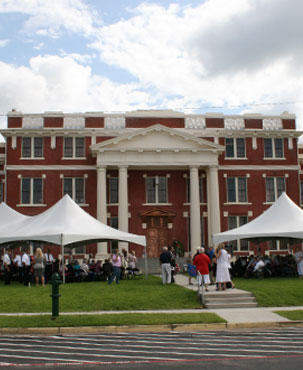 “It was like a sugar cube that has been saturated with water. It still looks good and holds its shape but if you touch it, it crumbles.”
—Former County Judge Mark Evans describing the deteriorated state of the courthouse before restoration, Groveton News, July 28, 2011

“When our courthouse was restored and the courthouse square improved we saw significant improvements in the downtown area as a result.”
—Margie Wheeler, Chair, Trinity County Historical Commission, in a letter to Byron Richards, City of Groveton

The county hired C.H. Page & Brother Architects of Austin to design the 1914 Neoclassical courthouse.  The Page Brothers emulated the style of the modest Records Building, already on the courthouse square, then expanded and transformed it into the graceful building that exists today. They added a three-story center block with imposing limestone columns and classical portico to house the sleek new double-height District Courtroom on the second floor. The West Wing matched the shape and style of the original Records Building, providing a three-part composition that accounts for the slender proportions of the courthouse as it was stretched to fill the center of the square.  The distinctive copper entry doors and transom (which may have been relocated from the original Records Building) open to a cross-axial hallway and secondary entrances that provided ventilation throughout the building, a critical design element in this hot and humid East Texas climate.Construction History: Since Trinity County was established in 1850, the county has had four county seats and six different courthouses.  Railroads and sawmills have played significant roles in the county’s history and the location of the courthouse.  When the Trinity and Sabine Pass Land and Timber Company offered not only to furnish land, but build a temporary frame courthouse, voters moved the county seat to Groveton in 1882. The town also had the advantage of being the geographic center of Trinity County, as designated by the marker on the courthouse square.

Groveton, or “Grovetown” as it was originally called, was founded across the tracks from one of the largest sawmills in the South. It was named for a grove of blackjacks separating the town from the mill. In 1900, as other mills closed in the area, Groveton grew to four times the size it is today. Lawlessness soon followed this explosive growth. John Wesley Hardin, a noted Texas outlaw, is reputed to have begun his life of crime as a teenager growing up here. Locals retaliated by banning saloons and alcohol to maintain order.

The first three courthouses were destroyed by fire, sometimes under suspicious circumstances. In 1880, District Court records were stolen from the courthouse and never recovered. By the time the current courthouse was erected, Trinity County citizens understood the necessity for a substantial building to preserve and protect county records, as well as symbolizing the power of law and order.

In 1908, a freestanding vault was constructed next to the 1884 courthouse, designed by L.S. Green of Houston. It is an exact duplicate of the Polk County Records Building on the courthouse square in Livingston. By this time, it was apparent that the 1884 courthouse was unstable and in danger of collapse. It was demolished to make way for the 1914 courthouse currently on the site.

Listed on the National Register of Historic Places in 2004. Designated a State Antiquities Landmarks in 2006 and a Recorded Texas Historic Landmark in 2004.

The project fully restored the courthouse to its 1914 appearance. The exterior masonry was cleaned, patched and repointed. The sheet metal cornices and roof balustrades were far more deteriorated than originally estimated, resulting in complete replacement of both the decorative elements and the wood support outriggers. A new roof was added. Original wood sash and steel frame windows were restored, including wood casement windows on the Second Floor that had previously been replaced. Due to the widespread use of asbestos-containing materials, unforeseen extensive abatement caused schedule delays and increased the overall cost of the project.

The District Courtroom was reconfigured with the judge’s bench positioned within the original proscenium arches to reflect the historic configuration, based on similar Page Brothers’ courthouses of the day. Since none of the historic furnishings survived, all millwork and benches were reconstructed with adaptations to allow for handicapped access from the front of the courtroom via the courthouse’s first elevator. The elaborate cast plaster cornice was fully reproduced using fragments still in place above the suspended modern ceiling. The original pendant light fixtures and surface-mounted globe lighting, reminiscent of the 1920s Art Moderne style, were fully-restored. An acoustic plaster system was applied between the ribs of the barrel-vaulted ceiling to improve functionality of the courtroom, along with installation of a new sound system.

The Commissioners’ Courtroom was moved from its historic location on the Second Floor to a more convenient location on the First Floor with all-new furnishings and a second exit. Several aging non-historic trees were removed from the courthouse square to reflect the original historic landscaping and provide unobstructed views of the courthouse for the first time in decades.

Through the Texas Historic Courthouse Preservation Program administered by the Texas Historical Commission, Trinity County received a Planning Grant of $373,047 in 2004, then a Construction Grant in 2008 for $ 4,627,357 for a total funding amount of $5,000,404 on a $5.4 million construction project cost.

Former County Judge Mark Evans began the long road to restoration in 1995, when inmates from Eastham Prison came to paint the courthouse. The inmates discovered that underneath many layers of paint, the front double doors were actually covered in copper. The county hired Michael Gaertner Architects in 1999 to begin the grant application process. In 2003, they were awarded a Planning Grant to complete construction documents for the restoration. In 2006, a fire in the County Clerk’s office nearly destroyed the building and galvanized the community support for upgrading the courthouse. Once a grant was awarded in 2007, Judge Evans and the Commissioners Court issued $1.6 million in Certificates of Obligation to cover the county’s match.

Trinity County Historical Commission Chair Susanne Waller was appointed by Judge Evans, along with County Commissioner Jannette Hortman, to represent the county during all construction meetings. Susanne also serves the county as Director of the Trinity County Museum / Hensley Genealogical and Historical Research Center. Both representatives played significant roles during the construction process, by making team decisions and by travelling to Austin to support a Supplemental Funding request to the Texas Historical Commission. Commissioner Hortman continued to serve in this capacity even after leaving elected office.

County Judge Doug Page was elected during restoration of the courthouse, following Judge Evans’ retirement from office. He continued strong support of the project by attending construction meetings and appointing Margie Wheeler to organize the Rededication festivities. Margie organized a fitting tribute to the years of support from citizens of Groveton and the entire county.