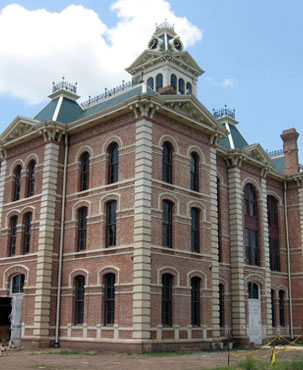 The Wharton County Courthouse was built in 1889 to the Second Empire style design by noted Texas architect Eugene Thomas Heiner of Houston.

The restoration phase included the demolition of the 1940s additions that had surrounded the building and resulted in a fully restored exterior complete with replicated pressed metal shingle roof and clock tower.

Round IV funding was used to restore the building's interior to its appearance just prior to the devastating hurricane of 1900. This project is notable as one of the most dramatic restorations undertaken in this program.