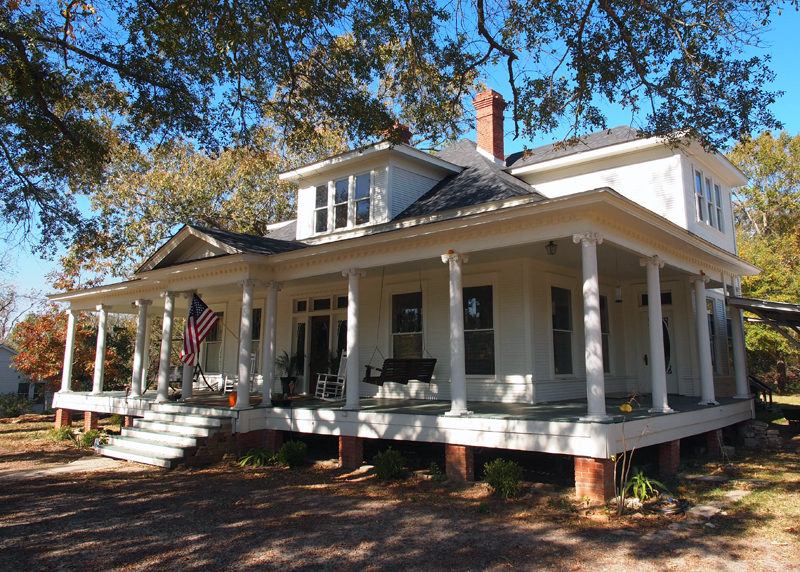 The Autrey-Williams House is a two-story frame residence constructed in 1912 just north of the county courthouse in Newton. The house’s prominent wrap-around porch has rich architectural detail, featuring the symmetry, dentil bands, Ionic columns, central dormer, and triangular pediment typical of the Neoclassical style. The main volume of the house, meanwhile, demonstrates the influence of the early 20th century American movements with intersecting hipped roof lines, slightly flared roof edges, hipped dormers, and top-sash leaded glass windows. The history of the Autrey-Williams House is uniquely tied to the economic forces that shaped the early growth of Newton County. It is constructed of old-growth Longleaf Pine, which was historically the most economically important resource of the region. The railroad arrived in Newton in 1906, allowing for exploitation of the natural timber resources and contributing to the community’s rapid growth. The Autrey-Williams House was built at the height of this economic growth by one of the industry’s leading local businessmen, L.M. Autrey. A subsequent owner, Thomas Williams, owned one of the local sawmills. In excellent overall condition, the house was designated a Recorded Texas Historic Landmark in 1980.

The Autrey-Williams House was listed in the National Register of Historic Places on January 29, 2013, under Criterion C for its architectural significance.