6 Cozy Historic Homes to Explore this Winter in Texas

Nothing reflects the remarkable history of venerable Texas like exploring the physical destinations where day-to-day life once occurred for residents.

Preserved locations beam with new life as their old stories are shared and forever remain ingrained within the bones of these architectural time capsules.

Whether you are a history buff, an architecture enthusiast, or simply love to peruse Texas relics, take a trip to one or make it a goal to see all six cozy historic homes this winter for an unforgettable adventure up, down, and inside the real places along memory lane.

The Bush Family Home gives visitors a first-hand look into the adolescence of our 43rd President, George W. Bush. Located in Midland, visitors are welcomed to fully immerse themselves in the remarkable lives of this famed political family.

Included among the memorabilia are candid photographs, theater playbills, official White House correspondence, and personal letters between close friends, such as Midlander’s Dottie and Earle Craig.

A late 1800 sight to behold, the Fulton Mansion is marvelous even by today’s standards. This incredibly grand Victorian villa was once the nesting spot of engineer, inventor, and rancher George Fulton, along with his devoted wife Harriet.

The impeccably restored home rises above the Aransas Bay in Rockport. Its unusual architectural style, a classic example of French Second Empire domestic architecture, is a rare and noteworthy monument to experience in person.

Its ostentatious exterior is surrounded by stoic live oaks and hallmarked by defining ornate trim with an eye-catching mansard roof.

Venture inside to discover progressive amenities for this period in Texas history, including interior gas lighting, central heating, and flush toilets. Visit this remarkably luxurious mansion for an extraordinary peek into the life of an affluent Texas family.

Make your way to El Paso to find another state treasure, the Magoffin Home. Delve into the lives of a prestigious multicultural family with roots deeply planted in U.S. expansion, settlement, military service, and trade ties on the Santa Fe-Chihuahua Trail.

Magoffin family members lived in the home for more than 100 years, many of whom served in multiple wars stretched across time, including the Mexican American War, the American Civil War, the Spanish American War, the Perishing Expedition, and both World Wars. 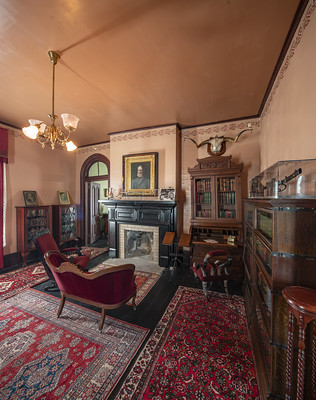 This multi-wing Southwest borderlands home was built in 1875 featuring adobe construction with glimpses of Greek Revival, a classic example of Territorial style architecture.

Other prominent features include the milled wood beams brought by wagon from the Sacramento Mountains of New Mexico, tongue and groove wood floors laid directly on the ground, and décor including popular items from the 1890s to the 1930s.

Once owned by United States Senator, Mexican War Veteran, and former Confederate General Sam Bell Maxey, along with his wife Marilda Cass Denton, the home showcases their strong ties to the political and social landscape of the era.

Beyond its architectural appeal, the three generations of family experiencing the climate of changes from the Reconstruction Era into the start of the First World War share intimate details about this period in Texas history.

If prestigious Texas politicians who influenced major U.S. decisions sparks your interest, head to the Sam Rayburn House for an in-depth and intimate glimpse into the life of U.S. House Representatives Speaker, Sam Rayburn.

Rayburn was elected at 24 years old in 1906 and continued to serve in the U.S. Congress for 48 years, with 17 terms as Speaker of the House.

Architecturally, this two-story clapboard home sits on 121 acres of surrounding farmland including cotton, corn, sorghum crops, and pastures for cattle.

At the time of its construction, problems with amenities presented challenges, including issues with running water due to well proximity and the need to pay electric companies to run electric lines and erect poles to supply power to it.

Located in Bonham, this historic home is a testimonial to the legacy of a powerful politician in the 20th century, maintaining his real accounts through personal photographs, cherished belongings, and original furnishings.

Unearth the amazing history of the first cattle ranch established in the Texas Panhandle in the Palo Duro Canyon area.

Located in Goodnight, The Charles and Mary Ann Goodnight Ranch is a vintage 1877 landmark sparking the reputable Texan partnership between Charles Goodnight and John Adair.

This partnership gave birth to the Goodnight-Thayer Cattle Company, which remains present-day in Armstrong County.

The beautifully restored and spacious Victorian-style, two-story home features a 268-square-foot second-story sleeping porch. The remarkable views from the porch allow visitors an incredible glimpse of the countryside, along with nearby bison herds.

These bison herds include the descendants of the original herd raised by Charles and his wife, Mary Ann Goodnight.

Entertaining and informative exhibits about the Goodnight family, bison herd, and settlement of the area are also featured at this historic site, along with the J. Evetts Haley Visitor and Education Center. Dig into the explorative legacy of the Goodnight Ranch.

Knowledge is truly the gift that keeps on giving! Plan an educational, inspiring, and fun trip to a Texas historic home this winter for a holiday season worth remembering.

Gain insight into the daily lives of Texans over time, both free and enslaved, prominent and unheralded.

From the Panhandle to Port Isabel, these historic homes will make you feel as if you have walked into Texas’ past.