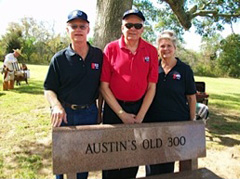 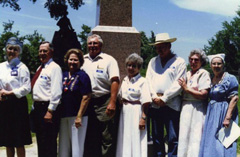 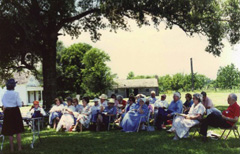 Sorry for the delayed response, Anne. We had a temporary problem with blog comment notifications and missed this. San Felipe de Austin Site Manager Bryan McCauley suggested you get in touch with him at 979.885.2181 or Bryan.McAuley@thc.texas.gov. Thanks!

Elijah and Elisha Issacks were both members of the Old 300.is there still any gatherings of the ancestors of these courageous men? Is so, when and where. My email is dnsclark_houston1@comcast.net

I ran across this and just wanted to say hi, in regards to my fathers side of the family , I am the last grandson of the line who founded new baden, texas . The old settlement house is still standing and should be found in historic society archives. some noted family names are sybil, oscar, phillip, and fred. My dad actually had a shark tank he named with young white tips and named them after

I am also a desendant of the old 300 and would like to know if you still meet please let me know at atw213@msn.com

My family member was Samuel Isaacks. Elijah and Elisha were his sons or nephews. I'm not at my desk to look them up.
My mother's grandmother was Zettie Isaacks who was grand or great granddaughter of Samuel.

Thanks for your inquiry about the Old 300. This group, comprised of descendants of Austin’s first settlers in Mexican Texas, is indeed very active. The Old 300 hosts two reunions each year. The next (mini-reunion) will be in La Grange on Saturday, October 26. For more information about the Old 300, its membership, and its gatherings, visit their website at www.sfaold300.org.

Elijah was father of Samuel and Elisha was his brother.

W A McClain along with James McNair was granted land as one of the Austin Old 300
any one know more about him ( believe he came from TN and had a son, John Morgan McClain. birth death marriage ???

It is wonderful to have a descendant connection to one of Stephen F. Austin’s colonists. As you know, there is very little information available about some of the earliest settlers that came to Mexican Texas. The Texas General Land Office holds the original land titles for these colonists, and our site staff at San Felipe de Austin State Historic Site can help you with contact information for other agencies or organizations and can offer some research suggestions. You can contact them directly at 979.885.2181.

I have located the original LAN records for the person I am researching, Joseph San Pierre (sometimes spelled Sampier) but it is Spanish. I read somewhere that these had been translated but I don't know how or where to find the translations. Any suggestions?

Thanks for your question, and sorry about the delayed response. I understand that our site staff at San Felipe de Austin responded to this same inquiry via email. Please let us know if you need additional assistance.

Is anyone out there related to John Kelly? He married Sarah Fisher, I believe. They had at least seven children. One of their daughters married, Margaretta, married Daniel Shipman. Hopefully, this is correct!

Our site staff at San Felipe de Austin has some information that might be of interest. Please contact them at 979.885.2181 or san-felipe@thc.texas.gov.

Ron,my grand mother was the sister to Lucie,I have a picture of them together.

I am a descendant of John Kelly. He had a son, James Kelly (1805-1846) married to Elmira Stevens. James was born before John married Sarah Fisher, and I have unknown mother for him and a sister, Marguretta. I do have another 5 children belonging to John and Sarah. James had a son, William Kelly (1837-1913) married to Mary Ann McCarty. They had a daughter, Hetty Susan Kelly (1868-1911) married first to James Robert Kell then James Newton Foust. Hetty and James Foust had a daughter, Jimmie Dale (1898-1967) who married Augusta Claude Spradley. They had a son, Nathan Weldon Spradley (1916-2005) who married Mary Josephine Boswell. They had me, Linda Kay Spradley Hawthorne Barnard. Hopefully somebody out there matches the info I have.

Elmira Stevens is my husband's 4th great grandmother through her second marriage to James Jones. I have been trying to find info on her parents- would you know anything?

Her grand daughter was my great grandmother Sarah Elmira Kelly (married Morris) she was known to us as Big Mama.

I'm also a descendant of John Kelly through Hetty Susan's younger brother, David Reece Kelly. He was my great-grandfather. He married Mary Elizabeth Young and they had a son, Virgel Isaac. Virgel married Nina Kathleen Crum and they had a son, John David who married Leora Alice Hartman. I am David and Lee's oldest child. I have very similar information as yours, except I didn't know that James and Margaretta had a different mother than their siblings. You can reach me at texirish5@aol.com. I'm still finding pieces of the family genealogical puzzle.

I am looking for information on Nicholas Moore who was married to Peter DeMoss' daughter Susannah DeMoss. Please contact me at revbobmoore@tx.rr.com if you have information as this is where I am stuck on my ancestry research.

While it is wonderful to have a family connection to some of Texas' earliest settlers, the lack of detailed information on so many of these pioneers can be frustrating. Our San Felipe de Austin State Historic Site frequently receives visits and inquiries of staff from people whose ancestors were among the Old 300 or later Stephen F. Austin contract settlers. Site staff regularly interact with the Texas General Land Office and other groups that have information about this era and these settlers. You might contact the site at 979.885.2181 (Tuesdays–Sundays, 9 a.m.–5 p.m.) for more assistance.