The Texas Tradition of Cattle Ranching Began in Tejas 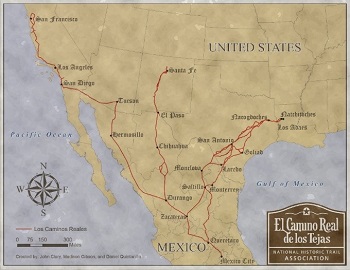 After a brief two years, the missions were abandoned but more firmly re-established in 1721. This second entrada included priests, soldiers, colonists, and 4,800 head of Spanish cattle. Initially, the Franciscan priests were charged with caring for the livestock, earning them the title of first cattle ranchers in Texas. These livestock duties were later transferred either all or in part to the soldiers stationed at the mission. In 1763, France lost virtually all land claims in North America at the end of the French and Indian War, and within a decade the Spanish missions in Tejas were closed as they were no longer considered a necessity. But the cattle the Spaniards brought to the region roamed, thrived, and multiplied.

Although the missions were abandoned, Spanish cattle were introduced to the East Texas region, marking the beginning of a lasting cattle ranching industry. After the priests and cowboy-soldiers evacuated the area, private citizens—like Antonio Gil Y’Barbo, who later founded Nacogdoches—began rounding up these herds and driving them to market at New Orleans, now a part of New Spain. These bovines were labeled according to their tameness, and many of these terms are still used today. Mostrenco, meaning “no known owner,” became Anglicized to “maverick.” Mesteño—meaning “ownerless” and originally referring to both horses and cattle—became “mustang.” Orejano indicated a creature unmarked or unbranded (oreja means “ear”), and cimarrón referred a creature in a feral state. Likewise, chaparreras or chaparejos (chaps) are still worn by cowboys today. And the lasso, an essential tool for ranching, came from the Spanish term la reata. 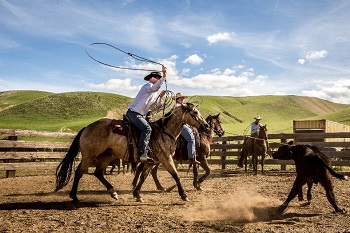 Not only do modern-day ranching tools and terminology have Spanish origins, but a modern descendant of Spanish cattle is the Texas longhorn. From about 1700 until 1865, herds of Spanish cattle roamed with abandon in the wilds of Texas.

After the Civil War, the economies of the former Confederate states were destroyed. The Spanish cattle were the natural resource that helped the Texas economy recover faster than the rest of the South, ushering in the Texas cattle drive era. Between 1865 and 1885, approximately 10 million Texas longhorns were driven northward out of Texas to Kansas railheads and loaded onto railcars bound for Chicago slaughterhouses to satisfy the demand for beef along the eastern seaboard. The Texas cattle drive era was cut short after only two decades thanks to expanding rail lines that reduced the profitability of trailing, the invention of barbed wire which closed the open range, and the discovery of “Texas Fever” which made Texas longhorns a threat to other breeds. Although disease-resistant, the long-horned Texas cattle carried a disease via tick that proved deadly to other cattle. These new developments in the west plus “Texas Fever” nearly spelled extinction for the longhorn.

Things changed in the longhorn’s favor in the 20th century. In 1927, the U.S. government sent federal agents to the Wichita Wildlife Refuge in Oklahoma to save the breed from extinction. The agents examined remaining longhorns, selecting only the purest specimens to serve as the base stock. Private citizens also helped preserve the breed. One such individual was J. Frank Dobie, a native Texan and University of Texas at Austin professor, who in 1941 published The Longhorns. In his book, Dobie celebrated the breed and shared old-time cattle ranchers’ tales about the longhorn way of life. Success was achieved in 1969, when the State of Texas Legislature designated the Official State of Texas Longhorn Herd. Currently, the Fort Griffin State Historic Site near Albany, a site managed by the Texas Historical Commission, is home to the herd. 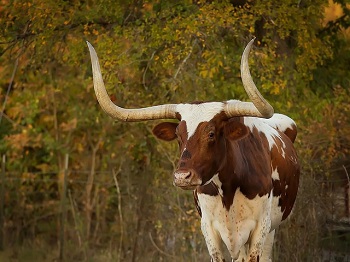 Cattle ranching is still an important part of the Texas economy. In 2012, Texas grossed $10.5 billion (yes, with a “b”) in cattle production—approximately half the state’s commodities. The Lone Star State is number one in beef cattle production in the United States, and Texas is home to 248,800 farms and ranches totaling 130.2 million acres.

Cattle ranching is not only part of the Texas economy, it’s a part of the culture. The University of Texas at Austin is home to an immensely popular college football team, the Longhorns, whose mascot “Bevo” has been adored by fans for a century. Twice a day, nearly every day of the year, the cattle drive era is reenacted at the Fort Worth Stockyards where Texas Longhorns sauntered down the streets. I personally know many a die-hard Dallas Cowboys fan praying for that next Super Bowl win. And at the State Fair in Dallas, you can’t miss “Big Tex” waving to every visitor at the fairground, a nod to the cattle drive era that left such a strong cultural imprint upon the state’s residents.