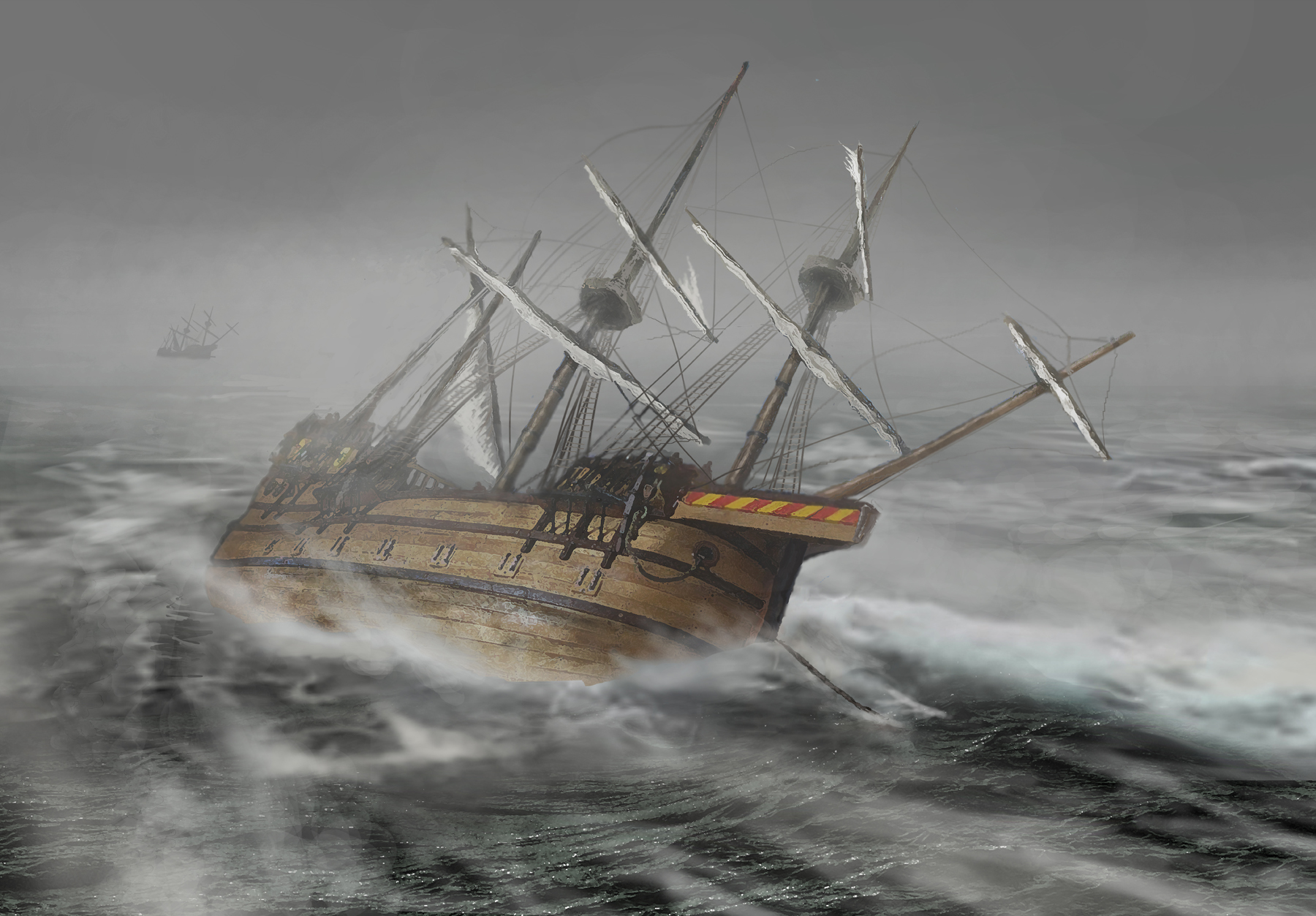 The Texas Historical Commission (THC) has been involved in investigations of the 1554 Spanish Plate Fleet since 1969—more than 50 years—and celebrated the semicentennial of the agency’s underwater excavations in 2022. Espíritu Santo, San Esteban, and Santa María de Yciar were part of a fleet of four vessels that departed San Juan de Ulúa (off Veracruz, Mexico) on April 9, 1554, towards Spain, with cargos that included raw silver and minted reales from Spanish colonies in the Americas. While en route to Havana, Cuba on April 29, the three vessels sank in a storm, with only San Andres reaching the port in too damaged a condition to continue onward. Nearly 250 individuals were lost during the wrecking event and overland march to Mexico; approximately 30 survived the tragedy. The same year, Spain dispatched two salvage expeditions from Veracruz that worked from July to September to recover the valuable cargo.

The shipwrecks were “lost” for the next 410 years until accidentally discovered in 1964 by amateur diver Vida Lee Connor during an aerial reconnaissance project searching for offshore reefs. With help from volunteers and students, she dove on the wrecks and examined the concreted cultural material. She publicized her discoveries and their identity in 1966 and included their locations, which she had already marked with buoys. A salvage company from Indiana, Platoro Ltd, Inc., began comprehensive artifact recovery of Espíritu Santo in 1967, which effectively terminated Connor’s access to the sites. She later summarized her work in two booklets produced in 1969.

The Platoro salvage exposed the lack of protections for state antiquities. The legality of their work was originally challenged by the Texas General Land Office because Platoro did not obtain the requisite permit for work conducted by out-of-state entities. The state issued an injunction against Platoro in 1967, halting their recovery effort, confiscating the artifacts, and beginning what would be a 17-year lawsuit. Bills to protect cultural resources on state public lands were introduced but failed to pass during the 1967 and 1969 legislative sessions, but the Antiquities Code of Texas was finally enacted in 1969 during a Second Special Session of the 61st Texas Legislature. At this time the Texas Antiquities Committee (now the THC) was created as the state agency with jurisdiction and authority over state archeological sites, structures, and other cultural resources. The state was awarded the artifacts from Espiritu Santo in 1984 as part of the culmination of the lawsuit.

The THC partnered with National Park Service (NPS) and the University of Texas (UT) in 1969 to relocate the shipwrecks. Work began with a visual survey of the beach at Padre Island to look for coins and other artifacts that may have washed ashore, providing clues to the approximate location offshore. The THC contracted a remote-sensing survey for the wrecks in 1970 by the Institute for Underwater Research, a newly-created survey company composed primarily of graduate students and staff from Southern Methodist University. This investigation succeeded in rediscovering San Esteban, which was unburied at the time, and recorded magnetic signatures for other 1554 sites and features.

The THC hired its first state marine archeologist, Carl Clausen, in February 1972 to lead field investigations to map and recover artifacts from San Esteban. Known originally as the Padre Island Underwater Research Project, excavation of San Esteban commenced on July 15, 1972, with the main fieldwork completed in 1975. More than 5,000 artifacts were recovered including ballast stones. Additional material cultural was collected from Espíritu Santo and a mooring area for the salvage camp—in total there are approximately 9,500 artifacts from all three sites. The THC partnered with UT, which conducted the field school at San Esteban in 1973 and also conserved the recovered artifacts. Santa María de Yciar was not discovered during this early work and was presumed to have been destroyed during the creation of Mansfield Cut. Additional investigations at the 1554 sites by former state marine archeologist J. Barto Arnold resumed in 1977, and later in 1985-1986 with NPS, both as larger evaluations of area cultural resources. A small number of artifacts were discovered. NPS, in partnership with the THC, conducted new archeological investigations of the region in 2020-2021, to examine potential impacts to submerged cultural resources from Hurricane Hanna in Padre Island National Seashore and to search for the elusive Santa Maria de Yciar.

The discovery, salvage, and excavations of the 1554 Spanish Plate fleet at Padre Island are inarguably one of the most important underwater archeological discoveries of the 20th century. These shipwrecks remain the oldest confirmed underwater archeological sites in the United States and Gulf of Mexico. The THC investigations were the first state-sponsored underwater excavations in the United States. The 1973 UT underwater archeological field school was the first of its type to be conducted in U.S. waters. The Texas legislature’s adoption of the Antiquities Code of Texas is still considered among the most protective state-level protections for shipwrecks in the nation, with treasure salvage prohibited in Texas waters. The ground-breaking archeological work and the artifact collections are an irreplaceable window into Spanish industry, influence, and cultural heritage in the Gulf of Mexico during the 16th century. Over 50 years later the Antiquities Code these wrecks inspired continues to protect the archeology of state.