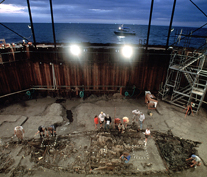 The Texas Historical Commission (THC) excavated two of Texas' most important archeological sites relating to the famous French explorer Robert Cavelier, Sieur de La Salle, who in 1684 led an ill-fated expedition to establish a French colony on the coast of the Gulf of Mexico.

First was the excavation in 1996–97 of La Salle's ill-fated ship La Belle that sank in Matagorda Bay in 1686. La Belle is one of the most important shipwrecks ever discovered in North America. The excavation, conducted in a cofferdam, produced an amazing array of finds, including the hull of the ship, three bronze cannons, thousands of glass beads, bronze hawk bells, pottery and even the skeleton of a crew member. The nearly two million artifacts represent an unparalleled glimpse into the supplies for a 17th-century European colony in the New World.

Following the excavation of La Belle, from 1999 to 2002, THC archeologists excavated Fort St. Louis, the settlement La Salle and his colonists established on Garcitas Creek in 1685. From some 150 original inhabitants, the group dwindled to about 40 by January 1687, when La Salle tried, along with 17 of the fort's able-bodied men, to hike to distant French forts in the Great Lakes region. About 20 people, including women and children, eked out an existence at the fort until it was attacked by Karankawa Indians in the winter of 1688–89. The Spanish visited the ravaged fort in 1689, and in 1722 a presidio was established directly over it. THC archeologists have made a number of exciting discoveries and unearthed tens of thousands of artifacts, including cannons, musket balls, gunflints, pottery, coins, and many other items used by the colonists. 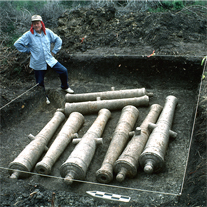 Artifacts from the excavations can currently be seen at the Bullock Texas State History Museum in Austin and in seven museums in six Texas coastal counties that banded together to create the La Salle Odyssey—a series of exhibits that together tell the extraordinary story of La Salle's expedition and the THC excavations. With the conservation of the hull now complete, La Belle has embarked on a final voyage to its permanent location in the Bullock Museum's first-floor gallery, where the public can view an exhibition about the ship, the excavations, and conservation efforts. Shipwrecked, a 26-minute special-effects film that tells the story of the people on board the ship, shows daily in the museum's Texas Spirit Theater.

Read more about the La Salle expedition in the Handbook of Texas Online.