What Does An Archeologist Do?

Confused about who can help when you discover an ancient fossil or an arrowpoint? Who can identify the unusual rock you found in the riverbed? Do you think an archeologist has the answer in each case?

Actually, archeologists study traces of the human past, while paleontologists study fossil remains of plants and animals, and geologists examine rocks and landforms for clues to the history of the earth. Still confused? Let's review the definitions and skills. 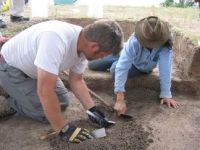 Archeologist — a scientist who studies past peoples and cultures by excavating and examining material remains as simple as an arrowhead or as complex as the ruins of a prehistoric village. Archeologists study ancient cultures as well as recent historic occupations.

Archeologists are interested in animal bones, plant remains and certain stone materials when these things occur at archeological sites and have a clear relationship to human activity. Animal bones that show evidence of hunting or butchering can shed light on what past inhabitants ate and details about the environment they inhabited. So can certain types of plant materials, such as seeds and nutshells.

Paleontologist — a scientist who reconstructs the geologic history of the earth through the study of plant and animal fossils.

Geologist — a scientist who studies the composition, structure and history of the earth.

Geologists derive important clues to the earth's history through the study of rocks, minerals and geologic features such as volcanoes, underground caverns, escarpments and other landforms. Fascinating landforms occur in every region of the state and draw the attention of geologists eager to gather more information about Texas' geologic past.

See our What Does an Archeologist Do? brochure for more information.

See our Careers in Archeology links.