The scow schooner Lake Austin seemingly had nine lives: After surviving the most powerful recorded hurricane in U.S. history at Indianola in 1886, it would serve as a rescue vessel during the later Galveston hurricane of 1900, only to succumb to a lesser storm in 1903. Lake Austin was an average coastal trader, and it is often the case that these “mundane” and “average” aspects of daily life can be lost, silently relegated to the backstory of our history. In maritime history and archeology this can be the case with types of vessels often referred to as vernacular or local watercraft—often work boats, fishing vessels, and regional merchantmen. Lake Austin, however, transcends its rather humble origins and has an enduring legacy that can be appreciated today.

The 56-ton Lake Austin was built in 1881 at Matagorda, Texas. It was 69 feet long with a breadth of 21.2 feet and a draft of 4.7 feet. It represented a prevalent type of Gulf coastal vessel, known as a Gulf centerboard scow schooner, easily recognizable by its shallow-draft rectangular hull, similar to today’s barge hulls. Over its nearly 20-year career, Lake Austin carried cotton, lumber, and merchandise between ports in Texas and Louisiana, including Rockport, Galveston, Port Isabel, Indianola, Brazos Santiago, and Port Charles. 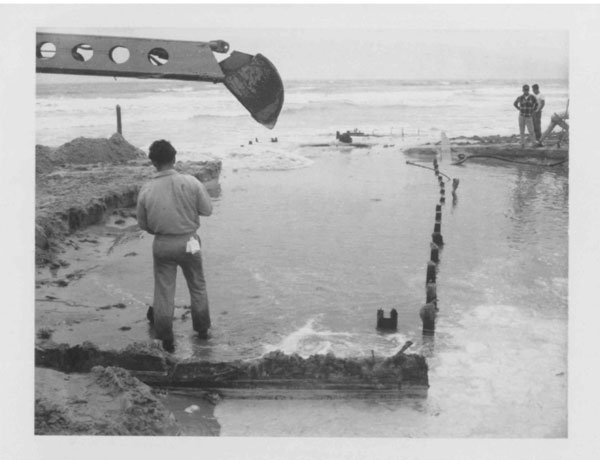 Lake Austin survived the devastating Category 4 hurricane that made landfall at Indianola, Texas on August 20, 1886. The vessel went aground at 5 p.m. during the storm and both the crew and vessel were saved. The hurricane resulted in the total destruction or abandonment of Indianola, once the most important port west of Galveston, and other smaller coastal settlements and landings such as Saluria, St. Mary, and Decros Point. The hurricane was heavily destructive to small watercraft like Lake Austin.

Lake Austin was the first vessel to aid victims of the powerful Category 4 hurricane that struck Galveston in 1900, resulting in the deaths of an estimated 6,000 to 8,000 people. This is still considered the highest-fatality natural disaster in U.S. history. Lake Austin braved the storm and rescued victims being carried out to the sea on floating debris. Following the hurricane, residents escaped the devastated city by booking passage on the schooner to Texas City. One of the passengers, Mrs. Griswold, is credited as being the first woman to leave the city following the cyclone.

Only three years later, on November 20, 1903, Lake Austin would finally succumb to weather events that had claimed so many vessels before it, and which it had heretofore cleverly avoided. While en route from Lake Charles to Port Isabel with a cargo of 44,767 feet of rough lumber, Lake Austin and its crew encountered a norther off the mouth of the Brazos River and attempted to ride out the storm at anchor. The cable parted and the vessel lost its best anchor and proceeded towards Aransas Pass. It was blown off course while entering the pass and drifted into the south breakers. Crew from the U.S. Life Saving Station at Tarpon came to their aid and threw the cargo overboard to lighten the vessel. Its old hull could no longer withstand the toil of the heavy winds, rain, and sea and began leaking. It was run aground on Mustang Island south of Aransas Pass to prevent it from sinking. 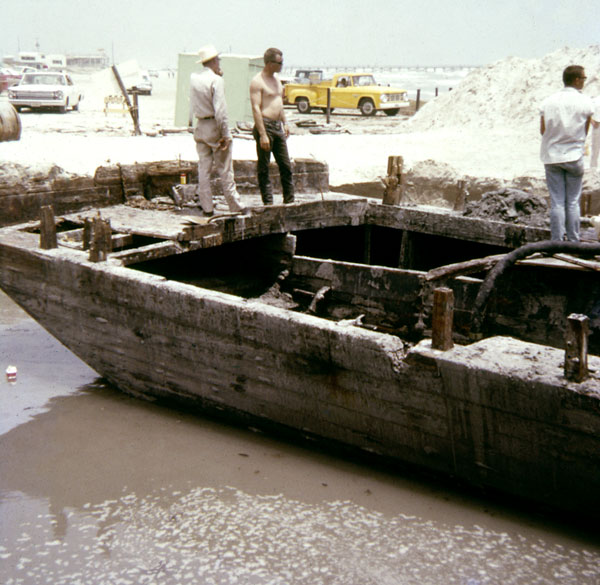 Her insured cargo, mostly timber, was removed and placed near the dunes. There were few sources for lumber in Port Aransas, so locals had taken lumber from the wreck to build houses. Police were stationed to guard the shipwreck and to make arrests to prevent further theft. One home built from the timber cargo was the Brundrett house, which was located on the corner of Brundrett and Alister Streets. The house had been moved several times over the years, but after Hurricane Harvey it was too damaged to restore and was demolished on June 7, 2018.

Lake Austin would be rediscovered 63 years later on April 23, 1966, after strong north and easterly winds caused the tides to remove approximately 2 feet of overlying sediment and expose it on the beach. Nueces County Park staff began excavating the vessel as it was mistakenly believed to be a Spanish ship. Police guards were stationed at the wreck site to prevent theft while the ship was exposed and being excavated. The vessel was flat-bottomed with both the masts and centerboards slightly off-center. The hold was only about 5 feet deep and bisected by a keel wall. Two small cabins at the stern and two small storage areas in the bow were separated from the cargo hold by bulkheads. Bunks in the aft cabins were mounted against the keel wall. There were no portholes or ventilation and no way of getting from one side of the hold to the other without first going up to the deck. During the second day of digging, the vessel’s registration number (140442) was uncovered and the identity of the shipwreck was discovered through a research contact at the National Archives. 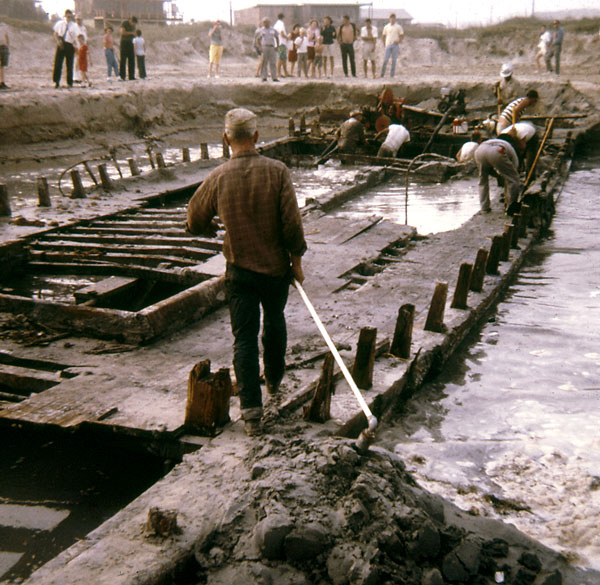 Through the county’s efforts, the vessel was fully removed from the sand and it floated up toward the dunes during a high tide. There were many different plans on what to do with the vessel, including exhibiting it as a tourist attraction. Despite the early excitement in the shipwreck, interest in the vessel waned once its more modern identity was learned. Two to three months after the excavation of the vessel was completed, it was destroyed and burned as a hazard to traffic. At the time there were no laws protecting antiquities on Texas public lands. The state antiquities law (the Antiquities Code of Texas) and managing authority—the Texas Antiquities Committee (now the Texas Historical Commission)—were enacted and created in 1969 following the salvage of the Spanish vessel San Esteban.

Nearly a century after the sinking of Lake Austin and 35 years after its discovery, local efforts to build a replica schooner commenced. The new vessel, named Lydia Ann, was designed as a functioning replica of a Gulf shore scow centerboard schooner like Lake Austin. Construction began in 2001 based upon the hull of a vessel on exhibit at the Galveston and Trinity Bay Museum and on plans for a Gulf scow schooner drafted by Howard Chapelle from the Smithsonian Institution. Chappelle was a well-published naval architect at the institution and a curator of maritime history. In addition, the Texas Historical Commission was asked for its file images of Lake Austin, to augment those already owned by the Port Aransas Museum, to aid in the reconstruction. The Lydia Ann Project was transferred to the Port Aransas Museum in 2013 and is currently being constructed there in partnership with Farley Boat Works. 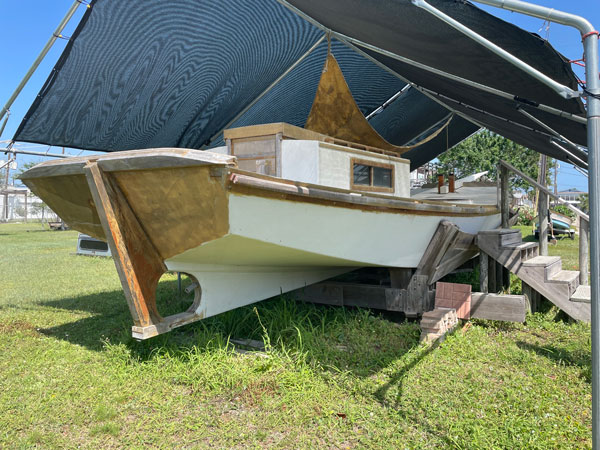 Miraculously in 2017, Lydia Ann did not meet the same fate as its predecessor and survived Category 4 Hurricane Harvey nearly unscathed. The cyclone made landfall near Port Aransas on August 25 with a storm surge of almost 12 feet in some areas. An estimated 85 percent of homes and 100 percent of business in Port Aransas were damaged. Construction on the replica would eventually recommence, but much work remains. A couple of modern additions to the vessel are anticipated, such as an electric motor and fiberglass coating to the outside of the hull. The 37-foot main hull and masts have been completed, but the rudder is unfinished and work on the gaffs, rigging, and sails has not begun. The hull’s overall length is about 57 feet, with a breadth of almost 13 feet. The vessel is unfinished due to staffing and funding deficits.

Lake Austin, and its replica successor Lydia Ann, are representative of the stalwart blue-collar work vessels that once greatly defined the types of trade watercraft used along the Gulf Coast during the late-19th and early-20th centuries. Despite its tragic destruction in 1966, Lake Austin remains the most complete archeological example of this commonplace work vessel yet discovered in the northern Gulf of Mexico. Both vessels are indelibly linked to the often destructive Atlantic and Gulf of Mexico storms that characterize the region. Beach archeological sites like Lake Austin are vulnerable to not only environmental impacts but also unlawful collecting and salvage. Precontact and historic sites, and their contents, on state public land are protected.

To report a shipwreck discovery like Lake Austin, please contact the THC state marine archeologist: amy.borgens@thc.texas.gov. The THC kindly acknowledges and extends thanks to staff and volunteers from Farley Boat Works and the Port Aransas Museum for their assistance with this article.