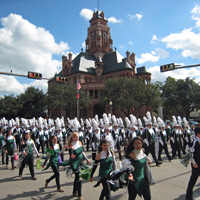 In addition to saving important historic landmarks, there are many benefits that follow the restoration of a historic courthouse through the Texas Historical Commission's award-winning Texas Historic Courthouse Preservation Program.

Not only is each courthouse restored to its historic appearance, but each is fully updated to the 21st century. Here are some of the direct benefits to counties: